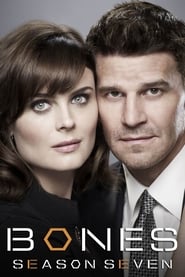 The seventh season of the American television series Bones premiered on November 3, 2011, and concluded on May 14, 2012 on the Fox Network. The show maintained its previous time slot, airing on Thursdays at 9:00 pm ET for the first half of the season. It began airing on Mondays at 8:00 pm when it returned on April 2, 2012. The season contains a reduced order of 13 episodes to accommodate Emily Deschanel’s pregnancy. Fox ordered an additional four episodes, that were produced during the seventh season, but aired during the first part of season eight.