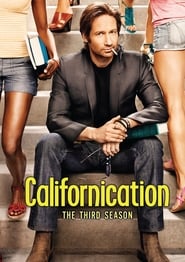 This season Hank Moody’s life, like the economy, is officially turned upside down. The lack of writing assignments forces him to get a “real” job as a college professor while trying to keep wild child Becca on the straight and narrow with Karen still working in New York. Can he learn to keep “regular” hours and inspire the next generation of scribes? First, he’ll have to stay on the right side of the dean of students, the dean’s wife and a teacher’s assistant who’s immune to his charms… Meanwhile, Charlie’s returned to the mainstream — he’s ditched the porn world for a job at a legitimate agency. His only problem is a boss/agency head who’s more interested in him than her clients (hello, Rick Springfield!). It would all be manageable with Marcy by his side, but she’s still bitter over his affair and is even back on the dating scene, which is further complicated since the two are platonically sharing the house – who can afford a divorce in a recession?