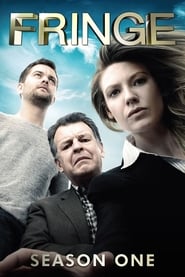 The first season of the American science fiction television series Fringe commenced airing on the Fox network on September 9, 2008, and concluded on May 12, 2009. It was produced by Bad Robot Productions in association with Warner Bros. Television, and its showrunners were Jeff Pinkner and J.H. Wyman. The first season introduces a Federal Bureau of Investigation “Fringe Division” team based in Boston, Massachusetts under the supervision of Homeland Security. The team uses unorthodox “fringe” science and FBI investigative techniques to investigate a series of unexplained, often ghastly occurrences, which are related to mysteries surrounding a parallel universe. FBI agent Olivia Dunham is portrayed by actress Anna Torv, while actors Joshua Jackson and John Noble play father-son duo Peter and Walter Bishop. Other regular cast members include Lance Reddick, Jasika Nicole, Blair Brown, Mark Valley, and Kirk Acevedo.

The season contained 21 episodes, although only 20 of them aired as part of the first season. The unaired episode, “Unearthed”, was aired a few days before the episode “Johari Window” as a special episode during the show’s second season.