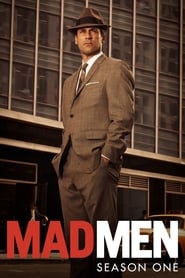 Season one takes place between March and November 1960. It introduces the fictional advertising agency Sterling Cooper. The season begins with the new secretary, Peggy Olson, starting her first day with the firm. As the season unfolds, the mysterious backstory of enigmatic ad man Don Draper is revealed as are the growing confidence and success of Peggy Olson.

The first season was highly praised for its excellence in writing, acting, and art design. It was acknowledged with numerous honors from industry awards, including the Primetime Emmy Award for Outstanding Drama Series, the Golden Globe Award for Best Drama Series, and a Peabody Award.