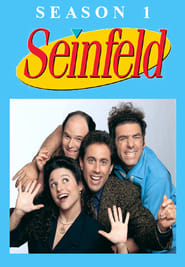 Season one of Seinfeld, an American television series created by Jerry Seinfeld and Larry David, began airing on July 5, 1989 on NBC. Originally called The Seinfeld Chronicles, the series’ name was shortened to Seinfeld to avoid confusion with another sitcom called The Marshall Chronicles. The season finale aired on June 21, 1990.

Seasons 1 & 2 DVD box set was released by Sony Pictures Home Entertainment in the United States and Canada on November 23, 2004, thirteen years after it had completed broadcast on television. In addition to every episode from the two seasons, the DVD release features bonus material, including deleted scenes, animatics, exclusive stand-up material, and commentaries. With only four episodes after the pilot, season one of “Seinfeld” is one of the smallest sitcom orders in television history.