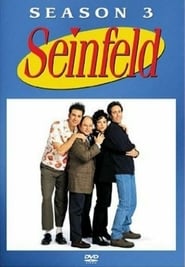 Season three of Seinfeld, an American television series created by Jerry Seinfeld and Larry David, began airing on September 18, 1991 on NBC, a U.S. broadcast television network. It comprises 23 episodes and concluded its initial airing on May 6, 1992. “The Tape”, “The Pen”, and “The Letter” are some of the season’s episodes that were inspired by the writers’ own experiences. Co-creator Larry David admits that season three was a big turning point for the series in terms of how the show was made; it’s where the writers started doing non linear storylines with episodes containing multiple stories. George was becoming a bigger liar, Elaine was becoming more quirky, and Kramer was becoming surer of himself throughout his crazy antics. This season received eight Emmy nominations and one Directors Guild of America Award.

The DVD boxset for season three was released by Sony Pictures Home Entertainment in Region 1 on November 23, 2004, twelve years after it had completed broadcast on television. It was also released in Region 2 on November 1, 2004 and on October 18, 2004 in Region 4. As well as every episode from the season, the DVD release features bonus material including deleted scenes, exclusive stand-up material, and commentaries.