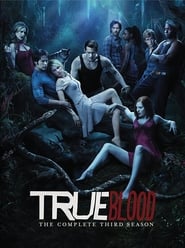 The third season of the television series True Blood premiered on June 13, 2010 simultaneously on HBO and HBO Canada. It concluded its run on September 12, 2010 and contained 12 episodes, bringing the series total to 36. It loosely follows the plot of the third novel of The Southern Vampire Mysteries series, Club Dead.